August was a busy month, starting with a two-day training seminar on medical child abuse at the Douglas County, Colorado, Child Advocacy Center on August 8th and 9th. I went expecting to have to spend the first hour changing perceptions on this abuse. As a police officer, I can flatly say police perceptions of this abuse are the hardest to change. To my delight, during the class introducing themselves, at least 10 of attendees spoke of cases of medical child abuse they were CURRENTLY investigating. Their team had 5 open cases of this abuse. Douglas County is one county south of Denver between Denver and Colorado Springs. Douglas County had a population of 285,465 as of the 2010 census and they have 5 open cases of this abuse. That told me they were motivated to learn, and they certainly were. My presentation went an hour long due to open dialog and class participation. Dr. Janet Cahill (psychologist) made a great training partner and was spot on while speaking about evaluating offenders in this abuse. It made for an excellent training environment. Organizer Nicole Adams was fantastic. Again, 5 open cases of this abuse.

Is your team prepared?

Then it was on to the Dallas where I completed two presentations on this abuse for the National Crimes Against Children’s Conference. I presented on the Elisabeth Hunnicutt case with the father of the victims. George Hunnicutt really adds a different element to the presentation that seems to resonate with attendees. When the criminal offender told George Hunnicutt that she had poisoned his youngest son with prescription medication, George immediately took the one child home at the time to the bedroom, locked the door, and called police. He knew in that instance that the criminal offender had poisoned the child to mimic symptoms of hydrocephalus, leading to the placement of a feeding tube. When police arrived, they told George to take his wife to the county hospital for a psych admission and refused to generate an offense report. George fought for a month to get an offense report generated. There were over 250 attendees in the two sessions of this presentation. This included police, CPS, attorneys from CPS and criminal side, medical personnel and forensic interviewers. I asked in each session for people to raise their hands if they had received training on this abuse. Out of 250 people, 3 hands were raised. THREE! And these are child abuse professionals.

Finally, this morning I was invited to appear on the Mark Davis Radio Show, a local radio show here in DFW. It helped that I am 20-year friends with his wife, Lisa, and have known Mark for at least 15 years. The interview was timely due to the guilty plea last week of Kaylene Bowen-Wright in Dallas in a terrible case of medical child abuse. That plea has gone on to be reported on Fox national website and Facebook page, the New York Post, and many more news outlets across the country. We talked about why doctors would perform unneeded surgeries (always a question the public needs answered) among many other things about this abuse. But I won’t spoil it for you. It’s the first 10 minutes of the below link:

BY MICHAEL WEBER When talking about liability in cases of medical child abuse, there are several angles to examine when it comes […] 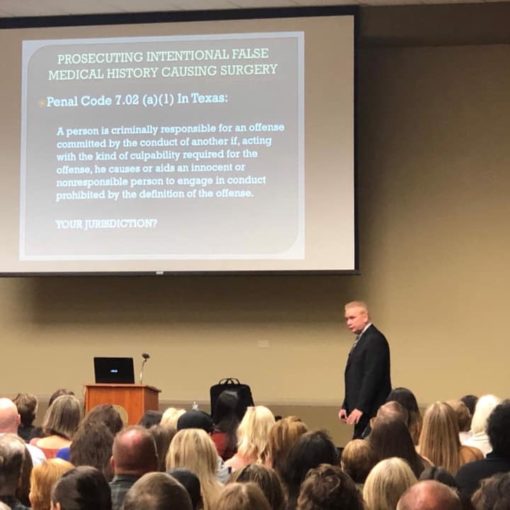